Our apologies for not posting sooner, but Ziva has been a very busy girl, which means I haven’t had much time to sit down and write. I’m on my lunch break now, and she’s napping after a long walk on a hot summer morning, so let’s see how much I can get us caught up.

Two weeks ago, Ziva had a photo shoot. As a first effort, it was mostly successful, considering that it was 95 degrees in the shade, and she was not standing in the shade when being photographed. But she did a pretty good job being patient as my friend Pam took pictures of her in front of a very large mural in Annapolis, Maryland. Ziva sat or stood in front of several different places along the mural when we asked her to — until she wouldn’t. After about 15 minutes, I tried to get her to sit and she just looked at me and barked. And then she looked at Pam and barked. “Nope. I’m done.”

I need to check with Pam before posting any of the photos here, but in the meantime you can check out some of Pam’s blog for her other work and even purchase a copy of one of her previous books, “A is for Angel,” an alphabet book of rescue dogs, which includes our dear old boy Fritz who passed away just about a year ago. Pam’s blog is called Dancing with the Digital Doggy .

While we sat in the shade, Ziva barked at a guy across the field, and while we were walking across the grass she pulled on her leash, but mostly I was just so proud of how well she did when we walked to and from the mural area and the car. We walked past sidewalk cafes and she stayed by my side very nicely. Yes, she needed some reminders not to get ahead of me, but when walking by a table of pizza I do not blame her! It was a lot of new sights and sounds — at one point even a very big dog about 20 feet in front of us — and she did not bark or pull or otherwise misbehave. It was a really big step on her path to being able to travel the world without getting anxious. I was very happy, and so was she! She is still such an energetic dog, and that’s ok. As long as she understands that she doesn’t need to get worked up when she in is new or unknown situations, the sky’s really the limit for her.

I’m also working on getting her used to spending the night in new places, and last weekend we spent the night at my brother’s house. He has two big dogs and I knew it would be great for her to spend some fun time with them. She has been around a lot of dogs in all the training we’re doing, but not for play time. She’s only off her leash with other dogs inPack to Basics class, and playing is not allowed then. The fact that she can do that — walk (well, she usually does run a bit) — around and around a room with 12 other dogs and not play, is actually pretty impressive for her. So I was really looking forward to her having this freedom to socialize with her canine cousins. As expected, her initial reaction when she saw them as we were getting out of the car, was to bark. But we all stayed calm and I did a bit of bridging and she quickly remembered that she had met these dogs and soon all was fine. Thus commenced 24 hours of dog circus, with Ziva and Murphy running and wrestling and wearing each other out, and Luna keeping a watchful eye on them both. 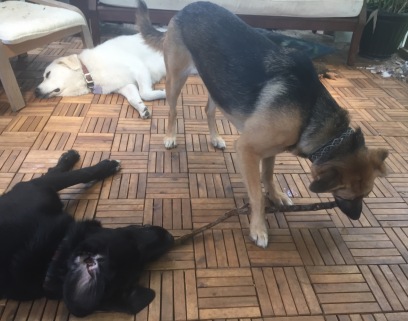 I was so happy to see Ziva playing with Murphy and understanding how to share and give and take! In this picture, Ziva and Murphy each have an end of the stick in their mouth. Nobody got jealous or fussy about that. In fact at one point they had a rope toy that they played tug of war with inside the house. I wasn’t sure at first how that would go, but they did great. There were a few moments during the visit where these two got a little too worked up (well, Ziva got a little too worked up, really), but one of the things I was most pleased about with this experience was that I was able to just say “Ziva, uh un!” or something like that to them and they took it down a notch right away. Murphy is only 6 months old, and each time Ziva sees him he will be even bigger, so although I think she’ll always be able outrun him she needs to understand how to keep play at a safe level. And she did!

Next up: Two Certificates of Achievement in One Week!!!!