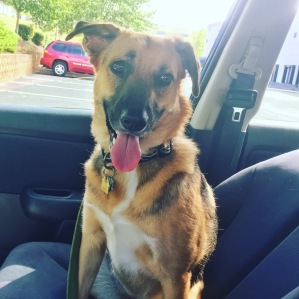 Ziva seemed very excited to be back at the Training academy. We did some socialization and behavior modification work, then took a quick break in the car with water and snacks before we went back in for Obedience 2 class. Next week I guess I need to pack TWO peanut butter sandwiches ….

We had a great day at our first Obedience 2 class on Saturday. It is a very small class — only 4 dogs, and two trainers! It’s almost like getting a personal training session. Ziva did really well with the new commands we’re learning: verbal and visual cues for sit and down, and for “watch me.” Previously we just did sit and down with leash pressure, but she picked up on the verbal cues very quickly. She also did really well with “Watch me,” which is something that had been suggested to us at the very beginning of her days with us as a way to get her to stop paying attention to other dogs. It was never successful then, and low these many months later we know that would never have worked with her adrenaline so high. So it’s really a case of understanding each dog’s personality and temperament, and knowing what will work, when — and what won’t. I guess there are levels of dog reactiveness? And if you have one at the level of Ziva when we got her, you need someone who specializes in it, not just someone who kind of just does it along with a lot of other things.

I also learned something new about dog communication on Saturday. Most of the other dogs in this class were in Obedience 1 with us, and Ziva knows them and doesn’t react when she sees them. We don’t do leash greetings in class, but we sit or stand just a few feet apart, and after having done 30 minutes of Pack to Basics, and an hour of Behavior Modification, Ziva has been just fine to ignore the other dogs lying a few feet away. So I was really taken off guard when she suddenly started barking and pulling on the leash towards Lucy Lu, a dog with whom she had been very friendly for the past 7 weeks.

Lucy Lu is young — only about 8 months old — large, white and fluffy. I knew her breed at some point, but I’ve forgotten. I just tried to google that up, as my 93-year old Dad would say, but am not coming up with the right breed. She has long, white, shaggy fur and looks kind of like an all white English Sheepdog. Except she’s not, and she also didn’t have long shaggy fur on Saturday, because she had been to the groomer. She had very short hair, and a little pompom at the tip of her tail, which was kind freaking Ziva out. My first thought was: “Why wouldn’t she recognize this was Lucy Lu? She knows her smell.” But the trainer explained that it wasn’t that she didn’t recognize her, it was that she didn’t know how to read that tail! It was only then that I noticed that the poof of hair at the tip was bobbing all around. Of course Ziva got stressed, and of course her initial reaction was to get excited.

So that was definitely a “teachable moment” — for me! I was being pretty relaxed, not really being aware of the dog near me, because Ziva “knew” her. But I really needed to be aware of the environment there as well, which on this day included Lucy Lu’s tail.

But once we got Ziva settled back down again, class went off perfectly. So much so that I decided to take Ziva in to the offie with me on Monday. I’m trying to get her into as many new environments as I can, all the time working on our leash work and our relaxation methods. Monday July 3rd was pretty dead in my office, since so many folks opted for an extra long weekend with the 4th of July holiday on Tuesday. I had gotten my boss’s okay to bring in Ziva, and made sure it was also okay with my colleagues, since we now work in a totally open office space. There would only be 4 of us on Monday in this large room, but we do try to be respectful of each other in there. They all said “Bring her in!” So I did. 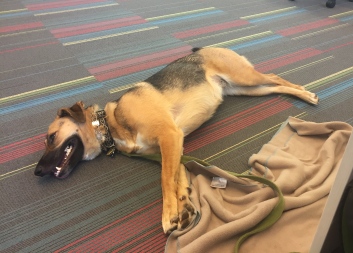 Well, she did okay. We only lasted about 4 hours, but that was kinda what I expected. It was a very hot day, and we went on a very long walk before we got to the office, but she was still pretty  excited to be in a new place. I brought lots of things from home, like a blanket for her to lie on, but as you can see from the picture, she didn’t lie on it. She also was not very interested in her usual bully sticks. She would lie down for a few minutes, and then she would start whining. I also brought in the nose work equipment, and we entertained everyone a few times by doing “Find.” She did better than I expected, to be honest! It just wasn’t enough to wear out her brain. But, she did cheer up a lot of people who were working in an office when most of their friends were at the beach or by the pool! She’s a long way from being a “therapy” dog, since although she loves to meet new people, one stroke from a new person sets her into a joyful squirm. But that’s just who she is right now. And I love her for it.

And all of these new adventures and experiences help to make her more relaxed at home, as well. I know that as time goes on, she will be able to expand her relaxation to new places. But for now, well, remember in the early posts when I wrote about how she would scare the bejeesus out of the cats because she would race towards them? Well, The cats definitely approve of the “new and improved” version of Ziva, even if she’s not sure what’s going on with them: 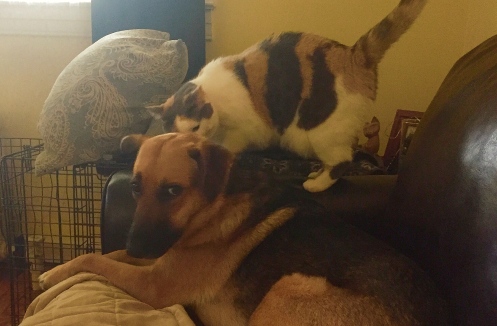 Juliet is the shyer, more skittish one of the two cats. But when Ziva is calm, she loves to come over and rub against her.